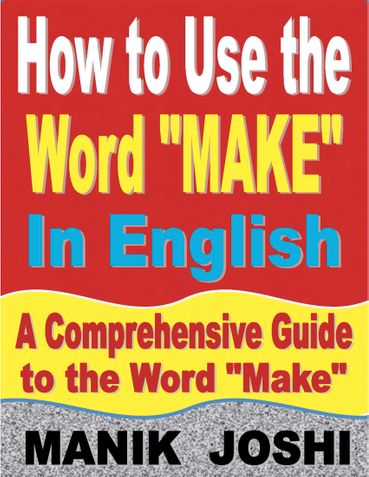 Make is an irregular verb. Its three forms are as follows:

MOST COMMON Meanings OF “MAKE” AS The MAIN VERB ARE AS FOLLOWS:

01. to create, prepare or produce sth by using different materials or parts

Example Sentences:
These companies are engaged in making machinery.
I made a toast on her birthday.
They prefer products that are made in the USA.

(make sth for sb)
Example Sentence:
She made dinner for him and his friend.

(make sb sth)
Example Sentence:
She makes him breakfast early in the morning.

(make sth (out) of sth)
Example Sentences:
What are his shoes made of?
i made a box out of an old picnic bench.
These cupboards are made of plywood without any sun-mica.

(make sth from sth)
Example Sentence:
He made a box from six wooden boards.
These pipes are made from steel rather than iron.

(make sth into sth)
Example Sentence:
Moringa dried leaves are made into tea.

02. make sb/sth/yourself + adj. to cause sb/sth to be or become sth

Example Sentences:
He committed a grave error which made us angry and we are unable to get over it.
He made his target too obvious.

(make sb do sth)
Example Sentences:
She made me sit in the white armchair
Their parents made them learn how to play the piano.
The national coach made them play like they never played before.
We made them try to do something that they weren't ready for.
They made them work hard throughout the day.
I was wondering what made him call me at midnight.
She made him know she didn't want to be parted.
Her love for fashion has made her take up a career in fashion designing.
He made her think she can't live without him.
His positive outlook towards life made him see the brighter side of every problem.
He told the news channel that constant harassment made her want to leave her career.
The clothes he wore made him look like a Spiderman

What The Pharma CEO Wants From The Brand ...
Vivek Hattangadi