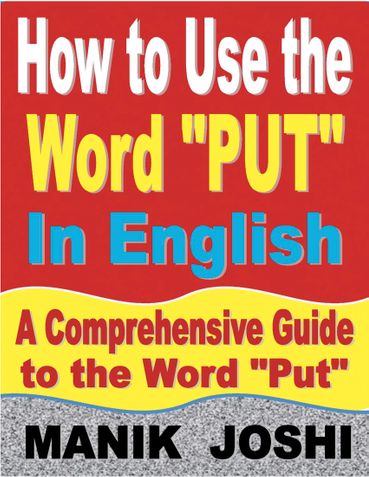 PUT is an irregular verb. Its three forms are as follows:

MOST COMMON Meanings OF “PUT” AS A MAIN VERB ARE AS FOLLOWS:

Meaning 01:
to move sth into a particular place, position or state without any special force

Example Sentences:
I have a very limited space to put the box in
Don't put your hand in my pocket.
Put sauce on top of your pasta.
Doctors prepared his body for burial, and then they put him in a coffin.

Meaning 02:
to forcefully move sth into a particular place, position or state

Example Sentence:
Her child put her hand through the hole on the ground.

Meaning 03:
to cause sb/sth to go to a particular place, position or state

Example Sentences:
His grandkids put him on the bench
She was put into a sanatorium when she contracted tuberculosis.

Example Sentences:
Why should she be put in charge of the Treasury?
He revealed that my songs put him in a good mood.
Put yourself in my position and then you will be the better able to understand my situation.
Put yourself in her position and you will really see what her life is like.
We don't want to put him at risk again.
Her inactive lifestyle has put her at risk of becoming obese.
Put my suggestion into practice for a week and measure the reactions.
May you have the courage to put his words into action!
He has the wonderful opportunity to now put his words into practice
It took less than 24 hours for him to put his words into practice.
The school superintendent is effectively pushing for a change that would put many out of a job.

Meaning 05:
to express, say or state sth in a particular manner

To put it simply, it was complete and utter chaos.
They are, to put it mildly, not on the best of terms.
The judge was, to put it gently, unmoved by her appeal.
How do I put it tactfully?

Can you put your emotions into words?
Can you put his words into my native language?

HOW TO ANALYSE A VISUALIZED DRAMA AND ACHIEVE ...
THULASIDHARAN.V.THILLAIAKATHU