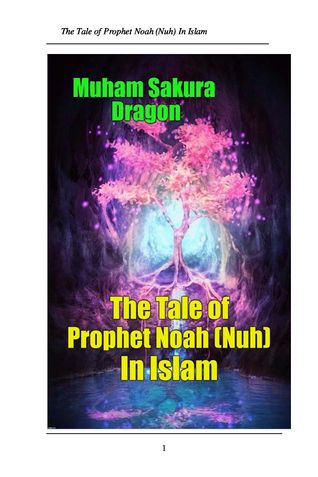 The Tale of Prophet Noah (Nuh) In Islam (eBook)

Prophet Nuh ibn Lamech ibn Methuselah known as Prophet Noah in the Old Testament, is recognized in Islam as a prophet and apostle of Allah (God). He is a highly important figure in Islamic tradition, as he is counted amongst the earliest prophets sent by God to mankind. According to Islam, Noah's mission was to save a wicked world, plunged in depravity and sin.

God charged Prophet Noah (Nuh) with the duty of preaching to his people to make them abandon idolatry and to worship only the One Creator and to live good and pure lives. Although he preached the Message of God with immense zeal, his people refused to mend their ways, leading to his building of the Ark and the famous event of the Deluge, the Great Flood in which all the evil people of his time perished. The influence of Noah's preaching and prophet-hood spanned 950 years according to Quran.

Noah's mission had a double character: he had to warn his people, asking them to call for repentance and, at the same time, he had to preach about God's mercy and forgiveness, promising them the glad tidings God would provide if they led righteous lives. References to Noah are scattered throughout the Qur'an, and there is even an entire sura carrying his name, Noah.

Little is known of Noah's personal history before his call to prophecy. However, tradition records him to have been the son of Lamech and grandson of Methuselah, one of the patriarchs from the Generations of Adam. Noah was neither the leader of the tribe nor a very rich man but, even before being called to prophecy, he worshiped God faithfully and was, in the words of the Qur'an, "a devotee most grateful".

He was a prophet, sent to warn mankind of that region and his people to change their ways. He conveyed the message for over 950 years.

Muham Sakura Dragon holds advanced degrees in computer science and has worked as kenjutsu instructor. He write fiction and non-fiction book for adult and children. Now he live in kyoto city.

The Tale of Prophet Noah (Nuh) In Islam

Be the first one to write a review for the book The Tale of Prophet Noah (Nuh) In Islam.

Book 2: The Story of Marriage of Lord ...
Ajai Kumar Chhawchharia