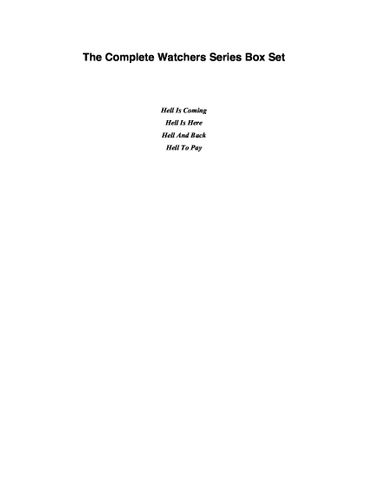 My name is Leia and I have always believed in monsters...

When I was seven years old, I had to watch as a demon killed my father and dragged my mother to Hell. A thing like that can really mess with a girls head, but I managed to get on with my life...just about.

But since I turned eighteen, the demons have started showing up again and I can see them everywhere I go. It isn't long before my life-such as it is-is turned upside down and I am drawn against my will into a world of demons and the supernatural, a world where I now have to learn to fight for my life.

But then I find Frank, my long lost uncle. Frank is a Watcher, a Nephilim tasked with controlling the dark supernatural forces that threaten to destroy the world of humans. To go up against these dark forces, I must learn the ways of the Watchers from Frank, which entails putting my life and very soul on the line.

Hell is coming for me--and I must do more than just survive to keep my precious soul intact.

<i>Join Leia in this action-packed supernatural thrill ride as she battles demons, monsters, Hell itself,and the hardest foes of all...hero own inner demons.</i>

Scroll up and hit the BUY NOW button.

I’m N.P. Martin and I’m a lover of dark fantasy and horror. Writing stories about magick, the occult, monsters and kickass characters has always been my idea of a dream job, and these days, I get to live that dream. I have tried many things in my life (professional martial arts instructor, bouncer, plasterer, salesman…to name a few), but only the writing hat seems to fit. When I’m not writing, I’m spending time with my wife and daughters at our home in Northern Ireland.  Be sure to sign up to my mailing list:
http://www.npmartin.com/email-sign/
And connect with me on Facebook:  https://www.facebook.com/npmartinauthor/

Be the first one to write a review for the book The Complete Watchers Series.