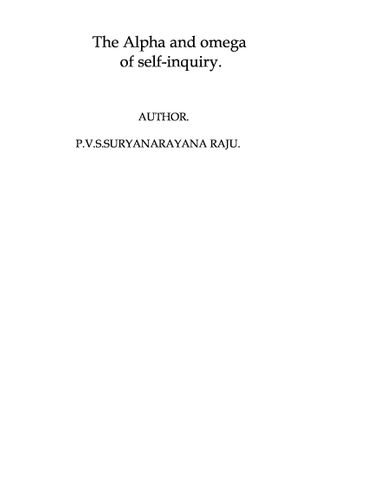 The Alpha and Omega of self-inquiry. (eBook)

Preview
Also Available As
Description of "The Alpha and Omega of self-inquiry."

Man is living in dreams in deep metaphysical sleep.To belong to any religion or crowd is to be a slave psychologically and our freedom is cut at psychological level.To awake into Self from deep metaphysical sleep self-inquiry is the way.Rituals,prayers,mental disciplines keep us in the sleep.Such religion is really an opium.self-inquiry is a scientific investigation into self and is beyond belief.
Man as he is, is simply living in a dream -- the dream of the ego, ambition, power, prestige. The man of wisdom is one who has come to understand that all this is going astray. One day it happened that I was at Mulla Nasruddin's house. Mulla Nasruddin's teenager son had dented a fender of the family car. 'What did your father say when you told him?' I asked him. 'Should I leave out the cuss words?' he said.
'Yes, of course.' 'In that case,' said the boy,’ he did not say a word.'
One day when you look back on your life you will not see a single act that was intelligent -- all were stupidities, foolishnesses. You will feel simply ashamed. The sooner you realize it, the better.
This is what SANNYAS(Renunciation) is all about: a recognition that the way you have lived up to now was absurd; a gesture that you would like to discontinue with your past. By changing the name and by changing the dress nothing is changed, it is a simple gesture that now you feel ashamed with the old identity. It was so foolish that it is better to forget all about it. A new nucleus, a new name, so you can start afresh. And it is easier to drop the past than to renovate it. It is easier to be completely cut off from the past rather than to modify it. You can paint a foolish thing, you can modify it, but you cannot make it wise -- it will remain foolish. It is better to drop it.

So if this recognition has come to you that we are astray, feel blessed, and don't forget it. Remember it continuously. Unless you have come back to the path, go on remembering it. Just recognizing it once won't do, you will have to live it, remember it for a long time continuously, again and again, so the hammering continues -- whatsoever you have done in the past, it is finished. At least if you remember that it was all wrong... and I say ALL wrong. Don't try to decide that a few things were good. I insist: either ALL things are wrong or ALL things are right. There is no other way. It is not possible that a foolish man can do a few things that are right. And the vice versa is also not possible that a wise man can do a few things that are wrong. A wise man does ALL right and a fool goes on doing ALL wrong. But the fool would like to choose at least a few things right, the fool would say,’ Yes, I have done many things wrong, but not all.' Then those things that he saves and says were right will become the centre for his ego again. So be totally frustrated with your past.