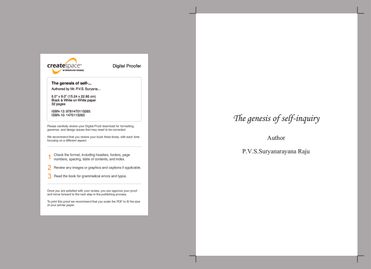 The genesis of self-inquiry (eBook)

Siva Prakasam Pillai is a sincere truth seeker and he met Bhagawan at a very young age and he has an association with such a great soul for more than 50 years.Because of him we all got the book “Who am I” narrated by Bhagawan to him.All through his life his only quest is for truth and he is amply rewarded by enlightenment.Let us all be greatful to him.
Energy dynamics in Self-Enquiry:

The mind has a tendency to move,it is in continuous movement,so

there is momentum.Suddenly mind has impulse to do something and in

"who am i" Self-Enquiry, the movement of impulse is stopped suddenly

you are in activity,you are deeply absorbed in it.Sudden stoppage of

This being thrown leads us to the awareness of our being.Ordinarily we

move from one activity to another continuously without gap in between.

This habit is broken in "who am i" enquiry and a gap come into existence.

When there is a feeling an impulse to do something,stop without the

thought coming into picture.Miracles happen because in activity when you

stop,a gap happens.You will be totally taken away from the body-mind and

realm of activity.Energy is always in a movement,either going out or coming

in.Energy can never be static.Impulse of thought means energy is

moving out.All activities are movements towards that which is without,from

that which is within i.e movements from within to without.That movement

happens according to the direction given by the innate tendencies.When

the movement is stopped suddenly in "who am i" Self-Enquiry,the energy

cannot do anything other than moving inward.Even though thought stops,

the mechanism which can lead you towards the centre of awareness is there.

You are converting your energy and changing it's dimension every moment

awareness again.
If one is angry or violent,energy has been aroused and it

movement.If at that time,you start loving somebody,the same energy will

passion and compassion are one.The energy of anger,violence,peace are

one and the same.Only with real impulse does energy move.Anger is pure

energy.It can become bad if it goes out and destroy something or it may

of your being.It is like atomic energy in the atom,pure,innocent,neutral.

enormous electric power.It all depends on us.If one feels that anger is

bad,so i should stop,the energy moves into that mental consideration,

in which case also the energy moves from the inner to the outer.

So mental suppression does not change the dimension of energy.

If you start thinking about the centre of awareness,then also the energy

will move from the inner into thinking which is outer to the Self.

You can waste this inner energy very simply.Just a thought will be enough

to give it a direction thus limiting it.If thought process really stops during

Self-Enquiry,the centre of awareness of being explodes which is called

implosion.Mystics always live in that uninterrupted implosive state of being.

The genesis of self-inquiry

Be the first one to write a review for the book The genesis of self-inquiry.

The Four Requisites for Realization and Self-Inquiry
Nome