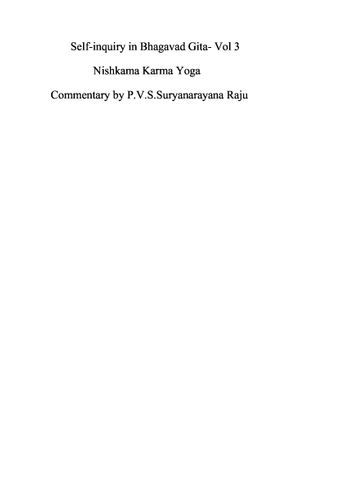 Bhagavad Gita is a holy book for Hindus.In the beginning of war between Kauravas and Pandavas Maha Bharata war happened over a dispute for kingdom. Lord Krishna is on the side of Pandavas. Arjuna wanted to have a look before the beginning of war and seeing all his cousins on the enemy side he thought "Is this war worth fighting killing all the relatives just for the sake of kingdom" and went into despair and told Lord Krishna, his charioteer that he is no longer interested in this war.But Krishna turned Arjuna's despair in a creative way into a longing for truth.Then Arjuna's focus turned on truth and fighting war became secondary to him.In this Krishna told lot of things about self-inquiry and author wants to share it with you.

Bhagavad Gita is a sermon given by Lord Krishna to Arjuna when the latter out of non-understanding wanted to escape from his duty as a warrior. Arjuna went into despair(Vishada) when he realized that he has to kill his own cousins to win the war and rule the kingdom just to enjoy sensate pleasures. This thought upset Arjuna and he felt that it better to opt out of war rather than doing such idiotic thing to kill his own relatives for the sake of kingdom. But the cause of war did not happen in a single day. His cousins not only refused to give their rightful share in the kingdom which they are entitled for, but they even refused to give even five villages to each of five Pandava brothers. His cousins Kauravas wanted to throw away from the kingdom and to see them as beggars. When all diplomatic efforts fail war became imminent. Sri Krishna is on side of Pandavas and he took the role of charioteer of Arjuna in the war. Seeing Arjuna’s despair Krishna took that opportunity positively and he turned the focus of attention of Arjuna towards truth. After hearing the sutras in Samkhya yoga Arjuna started longing for truth and war became secondary though he is a warrior. So Krishna is successful to convert despair of Arjuna into longing for truth. By nature coal and diamond are made of same carbon but it is a skill to convert coal into a diamond.Krishna did that in case of Arjuna by using his alchemy of understanding. There are 18 chapters in Bhagavad Gita but Samkhya yoga, which is the yoga of understanding is the direct approach to truth. Others are meant for those who cannot understand Samkhya yoga. Lord Krishna himself declared this. Just as many rivers enter into the ocean there are innumerable approaches to truth also. But this Yoga of understanding is best says Lord Krishna. So the author selected Samkhya yoga to convey the essence of Bhagavad Gita.

Be the first one to write a review for the book Self-inquiry in Bhagawad Gita Vol 3..