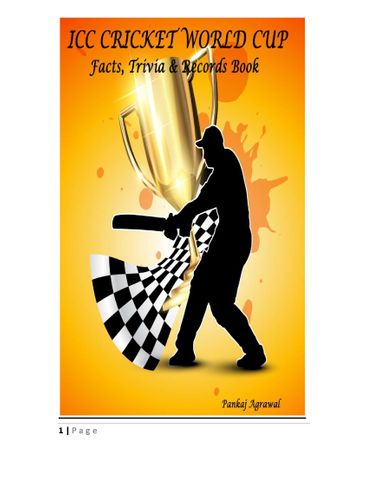 ICC Cricket World Cup is one of the top three sport carnivals in the World. First edition of the tournament took place in 1975 in England. Starting from England, tournament travelled to Indian sub-continent and then to southern hemisphere in Australia & New Zealand, Africa and then to Caribbean as well. The tournament has thus been hosted in every part of the globe. So far there have been ten editions of this tournament and eleventh is slated for early next year in Australia and New Zealand.

Tournament has evolved since its inception in 1975. It started off with players wearing traditional white cloths and matches with 60 overs for each side. There were four teams in each of the two groups. During 1975 and 1979, each team played other team in the group only once. However in 1983 World Cup, team in same group played each other twice. After first three tournaments in England, tournament moved out to Indian sub-continent in 1987 and innings size was also reduced to 50 overs.

1992 was a defining moment for the cup as first time colored clothing, white ball and day-night matches were introduced. South Africa also played first time during 1992 edition after South Africa came out of international boycott, once miserable era of apartheid was over. In 1999, 2003 and 2007, there were three stages in the tournament with group stage, super six/eight and then knockout. In 1996 & 2011, there were only two stages but knock out match started from quarter-final (group of eight) thus winner had to play and win three knock-out matches.

During this journey of four decades, the tournament has come across numerous amazing records, created by hundreds of players and teams, who participated in various editions of Cricket World Cup. Greatest cricketers of all time like, Clive Llyod, Viv Richards, Kapil Dev, Allan Border, Sachin Tendulkar, Ricky Ponting, Wasim Akram, Shane Warne and many more allured the tournament with their electrifying performances in the field.

This Book provides snapshot of all the editions of the tournament clubbed with numerous facts & records. It is not a mere record book; it gives reader a deep insight in history of Cup with extremely interesting trivia, which would definitely leave Cricket lovers enthralled.

Pankaj Agrawal is 41 year-old, IIT (Delhi) educated professional who works with a multinational. He is a Sports enthusiast. Pankaj is a Cricket historian and follows other games also.

He has keen interest in history, philosophy and mythology as well. He is a regular blogger and his areas of writing are Sports, Oil & Gas (Energy), and philosophy.

‘ICC CRICKET WORLD CUP - Facts, Trivia & Records Book’ is his second book. You can reach him on twitter at @pankajag1973.

Be the first one to write a review for the book ICC CRICKET WORLD CUP - Facts, Trivia & Records Book.

Other Books in Sports & Adventure

The Adventures of Kilimanjaro and African Safari
Vikas Pawar

WHAT IS FITNESS ?
neeraj pal