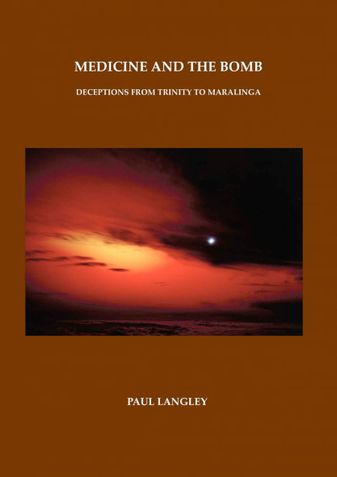 Medicine and the Bomb (eBook)

Deceptions from Trinity to Maralinga

Phosphorous 32, Strontium 89 and Iodine 131 were first synthesized in the 1930s at the E.O. Lawrence Crocker Radiation Laboratory, University of California. The substances were used in nuclear medicine by the Crocker researchers.

These substances were later found to be created by the fission process. Neutron radiation was used medically by Dr Robert Stone in 1937, also at the Lawrence facility.

The United States entered World War 2 possessing detailed medical and biological knowledge related to these radioactive substances, some of which would become infamous among the peoples afflicted by the atomic bomb.

This book looks at the findings of the early researchers at the Lawrence "Rad Lab" and places these findings together with the discoveries relating to uranium fission and the fission products. The militarization of civilian medical and biological data commenced some years before the formation of the Manhattan Project.

The book discusses this process and follows the progress of the knowledge, which was classified secret.

Japanese, South Pacific and Australian Indigenous victim experiences are examined in the light of knowledge held since the 1930s by nuclear authorities.

The biological, radiological and medical data relating to strontium 89 was developed by Dr Charles Pecher, who died tragically in 1941. His work was classified secret after his death and formed a major component of the secret studies into the effects of nuclear fallout.

The secret dangers of Strontium 89 and the suppression of Dr Pecher's medical treatment are examined in this book.

The work is a unique, extensively referenced, study of the development of the radiological predictive capability possessed by the Western Allies from 1942, through the era of atmospheric nuclear testing.

&quot;The information is superb and very understandable for someone with minimal physics / medical background – and excellent referencing. It is a fine reference and resource work -and your bringing together the early nuclear medicine research and subsequent knowledge of this within the atomic bomb project is a first.&quot; - Dr. David Palmer, American Studies, Flinders University of South Australia.

&quot;Dear Paul, I read your book. It is fantastic. It is an extraordinary inquiry. I think your book is unique: that no comparable analysis has ever been done. It could become a classic, as you qualify the book of Brucer. We sometimes qualify as bible the reference books that contain a huge quantity of informations! So is your book!&quot; - Evelyne Cerf-Pecher, daughter of Dr Charles Pecher.

I attended Urrbrae Agricultural High School, where I enjoyed Agricultural Science, Biology and Science in particular. After a year working at farming supply company, I joined the Australian Army in 1971. I was posted to the Radiac Calibration Centre, in the corps of RAEME, at 4 Base Workshop, Bandiana, Victoria. The Radiac Centre repaired and calibrated military radiation detectors and helped with the monitoring and identification of
nuclear fallout. At the time French nuclear tests in the Pacific was producing nuclear fallout, some of which was deposited in Australia.

I received basic training relevant to the Radiac Centre during my time there. In 1973 I left the Army with a knowledge that the radioactive substances are a primary concern.

An X ray machine or CT Scanner can be turned off. Exposures can be controlled and are consented to by the individual exposed. This is not the case with radioactive material randomly released into the environment.

Medicine and the Bomb

Be the first one to write a review for the book Medicine and the Bomb.

A Brief Journey to the World of Elementary ...
Angelo George