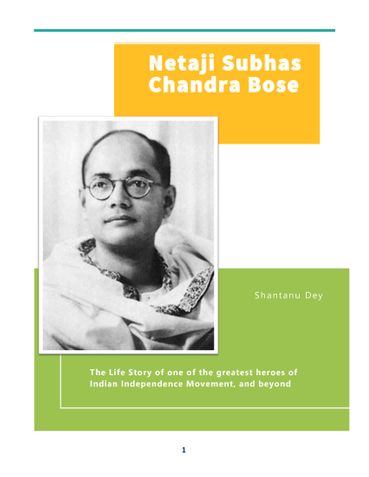 Netaji Subhas Chandra Bose - Life and Deeds and his Metamorphosis

This is the life story of Netaji Subhas Chandra, a comprehensive one that includes a Metamorphosis Chapter - his life after his so called death in a plane crash that never happened. This biography covers almost all significant phases of the Indian freedom movement, its leaders and their contribution and questions the claims of the court Historians of India under the Congress regime that freedom was obtained through non violence and satygraha of Gandhi. The book proves that freedom came, not by any action of Congress and its Gandhian leaders who infact thwarted the yearning for freedom at every stage, but by the collective willpower of the people and revolutionaries and by the actions of Subhas Chandra Bose and the INA that sent shudders through the British Empire. The books starts with the genesis or birth of Subhas Bose, his education, his quitting ICS and jumping headlong into the freedom movement under Deshbandhu Chittaranjan Das, his internment in notorious Mandalay prison, his comeback and assumption of various roles within and outside Congress, his travels to Europe. It covers the second phase of his life - his rise as the President of the Indian National Congress and the despicable behavior of Gandhi and his coterie in Tripuri and its aftermath, forming Forward Bloc and later his expulsion from Congress, his solo movement and popular support, his jail term and his great escape. The third phase of his life begins with an ardous journey to Berlin through Afghanistan, forming Indian Legion, transmitting via radio broadcasts, perilous journey across oceans to reach Tokyo, assuming the responsibility of IIL chairmanship from Rashbehari Bose, the Bhisma Pitamaha of revolution, the glorious Azad Hind Provisional Government, his leadership traits and able administration, the INA battle campaigns that almost succeeded, the retreat, the hazardous 21 day march to Bangkok, the staged disappearance and the legacy of INA. It covers the questions raised on the so called Plane Crash, the afterlife in the form of Bhagwanji or Mahakal and his great activities as a liberator of Asia. It also touches upon some of the controversies like his death, marriage, INA treasure loot, his politics and his collaboration with Nazis and Imperial Japanese as is the popular accusation of the Western Academic world.

Be the first one to write a review for the book Netaji Subhas Chandra Bose - A glance through the great man's epic journey.