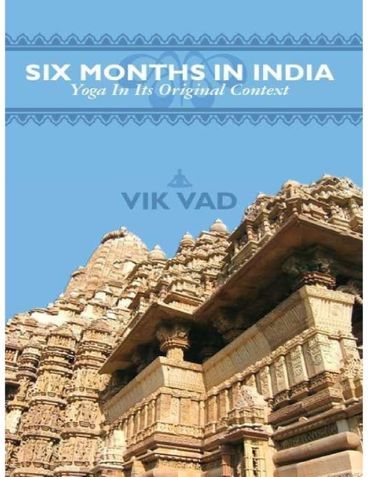 Yoga in Its Original Context

In a similar vein to Elizabeth Gilbert’s Eat, Pray, Love, new author Vik Vad offers his account of spiritual awakening in Six Months in India, an intimate collection of journal entries he wrote while traveling through India as an advanced self-studies yoga project. In order to more keenly understand the Hindu culture of yoga as well as gain insight into true Indian lifestyles, Vad headed to the land where thousands of gods and goddesses are celebrated—and his extended family was waiting. One summer when the author was a child his grandfather visited from India. It was then that young Vad became intrigued at how this eighty-something-year-old man could be so youthful, but it wasn’t until he was in his thirties that curiosity got the better of him. Therein he began a transformative spiritual journey as a practitioner of yoga—and an heir to a rich history of festivals, temples, and mysticism. Through his journal keeping, he describes what it’s like to live in an Indian household, participate in the Indian community, and worship as Hindus do, sparing no details. Told with a decidedly American candor and wit, this rewarding philosophical memoir is perfect for purveyors of yoga or those planning Eastern travels, and includes a glossary of Sanskrit terms—not to mention the “big picture” of how people live, laugh, love, play, work, pray, think, and behave on the other side of the world. There is poverty and pollution, but more than anything there is spirit and joy. And while Vad did explore yoga in its original context, he came to appreciate the differences between yoga in the West and how traditional Hindus see and live it.

Vik grew up in Austin, Texas, where, for much of his life, yoga was an on-again, off-again love, although at this point, he will never leave it, after noticing in his 30s that he didn't have the same energy, flexibility and health that he once had. "I knew that my workaholic and lifestyle habits were contributing to this, so I made some big changes, plunged into yoga full force and haven't looked back." Vik discovered yoga when his grandfather visited the U.S. from India when Vik was about three years old. His grandfather taught him some postures, as well as lifestyle tips. "Though he was in his 80s then, he always had a commanding presence, was in excellent health and was a total kid at heart." Vik was inspired by him as an example of a yogi who understood the true art of living this life. After graduating from a yoga teacher training program, Vik plunged right into teaching. During the training while teaching some of his friends, Vik watched yoga in action, how it helped them, and now he gets to watch some of his regular students grow and benefit from yoga, which he says is very fulfilling. Vik teaches Hatha in the Viniyoga style, incorporating pranayama (breath work) as well as meditation in a practice. This style emphasizes individual adaptation based on a student's age, ability, and needs, among other factors. He also teaches yoga nidra, a form of deep relaxation using guided meditation. Vik tries to incorporate some elements of traditional, classical yoga when teaching one on one. You may write to him at vikvad@ymail.com .

Be the first one to write a review for the book Six Months in India.