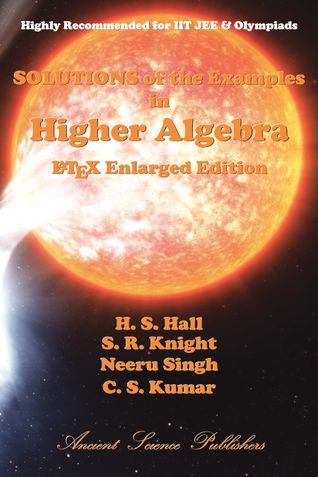 Solutions of the Examples in Higher Algebra

This work forms a Key or Companion to the Higher Algebra, and contains full solutions of nearly all the Examples. In many cases more than one solution is given, while throughout the book frequent reference is made to the text and illustrative Examples in the Algebra. The work has been undertaken at the request of many teachers who have introduced the Algebra into their classes, and for such readers it is mainly intended; but it is hoped that, if judiciously used, the solutions may also be found serviceable by that large and increasing class of students who read Mathematics without the assistance of a teacher.

We are grateful for this opportunity to put the materials into a consistent format, and to correct errors in the original publication that have come to our attention. Most of the hard work of preparing this edition was accomplished by Neeru Singh, who expertly keyboarded and edited the text of the original manuscript. She helped us put hundreds of pages of typographically difficult material into a consistent digital format.

The process of compiling this book has given us an incentive to improve the layout, to doublecheck almost all of the mathematical rendering, to correct all known errors, to improve the original illustrations by redrawing them with Till Tantau's marvelous TikZ. Thus the book now appears in a form that we hope will remain useful for at least another generation.

Solutions of the Examples in Higher Algebra

Be the first one to write a review for the book Solutions of the Examples in Higher Algebra.

Other Books in Engineering, Mathematics