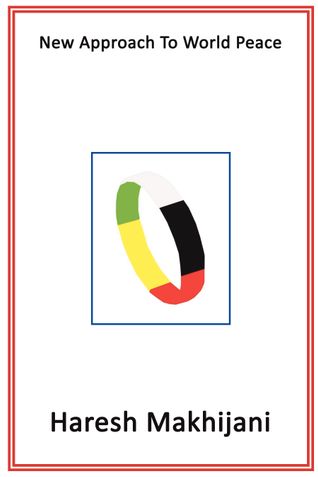 World Peace has been a subject matter of G7 Countries, typically United Nations has been the key negotiator in resolving international conflicts.
The “New Approach to World Peace” identifies the two hurdles, that human beings have, to overcome to attain global peace so that every person can enjoy and move freely on this Earth. The first hurdle is purely political, that is far too many people live in countries where citizens are not allowed to think free because, governments are too authoritarian, as in China, or like in Russia where Democracy has been highjacked or because of the flawed constitution as in India.
The second hurdle is that societies are so bound by their religion that free-thinking or human development is NOT easy. In both cases, citizens have limitations in contributing towards World Peace.
The Elements of World Peace that is, Republicanism and Neosecularism explained in this book, answers both these issues. The book also elaborates on how and why we should launch a campaign for World Peace.
Certain conditions must be created in every country, of the world to enjoy peace and prosperity. Those conditions are discussed as “Elements of World Peace” and they are:
-Constitutional Doctrine of Separation of Powers.
-People are Free, the Governments have restrictions. The government must make laws by representation only.
- Citizens have powers to change the Government when representation fails.
-Constitution must guarantee human rights including minority rights.
-Supranational Body gives additional power to citizens of Member States to protect individual rights.
-Society practices secularism

The author is promoting the idea through his book-New Approach To World Peace, that citizens of the world who are moderate in their religious views should unite and be part of one database where they can share their ideas and have a common goal towards Peaceful Globalization, therefore, he is urging everyone, to read this book and be part of in this human endeavor. The proceeds of the book will go to the start-up group for this cause.
The author also has the following observations on this subject:
1. Country, Religion, Tribalism, and Humanity
In our upbringing, we are taught, to be loyal to our country, we are also given lessons of religion, and surely reminded again and again of birth affiliation towards our ethnicity and where our forefathers came from.
In the West European countries, North America, China, Russia, and even Japan priority to the “country loyalty” is given over religion. All citizens have the same rights and are protected equally in the court of law. Furthermore, in western countries, young children are taught in schools how to express their thoughts freely without interference from the State authorities. Religious couching is deliberately avoided in government-funded schools.
Results are clear, All the above-mentioned countries have advanced in Science, Technology, Economics, and Sports and their citizens enjoy better health and prosperity.
2. On the other hand, in Africa, most countries of South America, Middle Eastern countries, and most countries in Asia from Iran to Indonesia where loyalty towards religion comes first, and then their country. Millions become refugees and/or persecuted in their own country just because those minority groups believe in a different faith.

Please note, that even in developed countries, the priority of “humanity-couching” is none. Country loyalty comes before humanitarian values. There is no standardized code of humanitarian principles, which is taught in all schools and that can be applied globally. Pain and suffering in Africa are hardly felt by common citizens of developed countries.
Yes, some religious organizations of Christianity are doing a good job, just for conversion's sake.
Saudi Arabia wants to create Muslim-World so they can get worldwide Hajj tourists.

About the Author:
Haresh Makhijani is 68 years old and lives in the U.S.A for more than 33 years. Since his teenage days, he has enjoyed listening to the interviews of heads of State discussing world issues. In 2015 one-line-thought came to his mind that was:
“ I Love my religion but I don’t hate yours” soon thereafter, the other four principles were added to complete the philosophy. This philosophy is called “Neosecularism”. Here the objective is to bring closer, all religious followers, from the world, who DO NOT have blind faith in their religion and provide them a common platform. So all can share and contribute towards peaceful globalization.

The author has also discussed the political issues of the world, in the book under the heading “Elements of World Peace”.
Please read this book and contribute towards Peaceful Globalization.

Be the first one to write a review for the book New Approach To World Peace.

Towards the Inside
Menaka Neotia

The Road To Revolution
JD