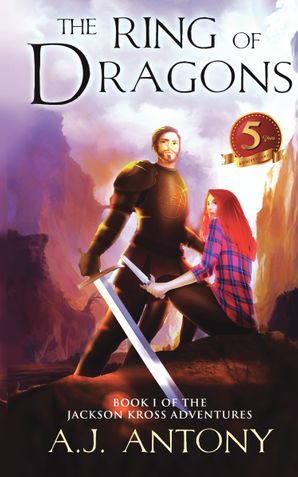 The Ring of Dragons

Jackson Kross is a Knight Internee of the Sovereign Empire. All he wants in life is to collect enough valor points for his Accolades, earn a proper knighthood and serve some wealthy lord. After all, dragon-mounted knights had good career prospects.

But along came an unexpected quest, one that he could not refuse. A simple "chaperone the maiden" as a favor to his old friend: Accompany a girl from London to the enchanted Sovereign Lands using a portal.

What could go wrong? Apparently, a lot.

The young knight is not prepared for the disaster that ensues. In this brave adventure against mistaken identities and black magic, Jackson finds himself at the crossroads of honor and justice, love and treachery, and above all, life and death.

A new, dark power is rising within the Empire, and all that stands in its way is one half-baked knight and a physically-disabled dragon.

A.J. Antony loves to write fantasy fiction with a twist, focusing more on an adventure/mystery style, exploring various ideas worth giving a thought.

His main inspirations have been authors like Michael Crichton and J.K. Rowling, PC games like Age of Empires and medieval RPGs, and other myths and legends. So it's not a surprise that his stories have a flavor of Harry Potter, Game of Thrones, and adventures like Eragon.

The Ring of Dragons

Be the first one to write a review for the book The Ring of Dragons.

Quest for the Flute
Veidyanath V