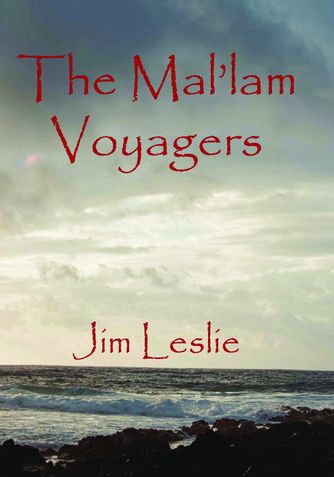 The Mal'lam Voyagers is an outstanding new saga of the Polynesian Pacific that rivals Michener; destined to become a classic of Oceanic literature.

This is the story of an ancient sea-faring people who explored and settled the vast reaches of the Pacific Ocean before the Polynesians existed as a culture.

Fleeing aggressive and avaricious invaders in the second millennium B.C., in what is now called Southeast Asia, their ancestors began to move ever south and eastward to find a new homeland. For three hundred years they found respite in a kindly archipelago just north of the Equator.

But then geological forces made these islands uninhabitable and again the Mal’lam became vagabonds upon the great ocean. They roamed again to the south and east, leaving scant traces of their journeys.

Who were these mysterious people? It is certain that they were a proto-Polynesian race possessing a keen intelligence and physical stamina, maintaining a highly organized society and technology.

What were they like? What motivated them? And what became of them? Sail with us far into the past, and join the adventures of a unique and nearly forgotten people.

Jim Leslie was born in 1939 in the American Northwest. Raised and educated on the Oregon coast, his attention was very early drawn to the lure of the unknown beyond that great horizon.

Many of his childhood dreams were cast out upon the cold waters of the North Pacific, later to be reclaimed from the warm tropical waters of Hawai'i. Part-time employment in the nursery and landscape industry while attending university led to a full-time career in that field.

A natural artistic bent allowed him to include cartooning, painting and sculpture in his repertoire of skills. Jim was also mightily afflicted with the 'travel bug'! He lived and worked in Oregon, California, Massachusetts and then Hawai'i. It was in Hawai'i that he developed his abiding interest in the sea and most especially Oceanic voyaging.

He carried that interest to his new and present home in Australia where exposure to Indigenous and Islander cultures further expanded his fascination with ancient societies. A daughter's suggestion then led to some experiments in writing, which steadily became a serious focus of his energies. Years of leading and training workers in large-scale landscape construction led to some work as a training facilitator on Government sponsored work programs.

Located now on the Sunshine Coast in the State of Queensland, Jim works as a live-in Caretaker at a Red Cross accommodation facility. With his wife's patient encouragement, he is engaged in work on the sequel to his novel, 'The Mal'lam Voyagers' and a book of short stories.

Be the first one to write a review for the book The Mal'lam Voyagers.