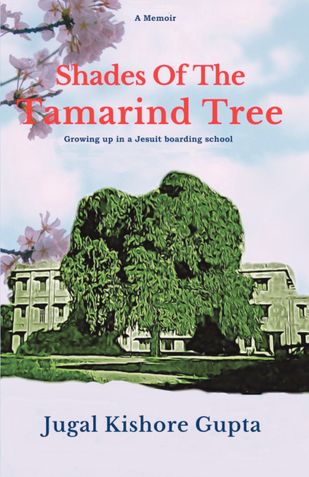 Shades Of The Tamarind Tree (Paperback)

Growing Up in a Jesuit Boarding School

THE UNTOLD STORY OF IRISH AMERICAN JESUITS WHO DEDICATED THEIR LIVES IN SERVICE OF INDIA'S NEEDY POPULATION, CONTRIBUTINGSIGNIFICANTLY IN BRINGING WORLD CLASS EDUCATION TO SOME OF THE MOST UNDERDEVELOPED REGIONS OF THE COUNTRY.

Shades Of The Tamarind Tree is a heart-warming memoir written in the backdrop of a Jesuit Boarding School in India in the 1960s.
The story had an obscure prelude with Pope Benedict VI issuing the Apostolic letter Nova in Indies for establishing a diocese in Patna, India. The sacred task trickled down to the Jesuits of Missouri province in the USA.Four years later, in 1921, the first batch of American monks arrived in Bihar's capital city, Patna, after undertaking an arduous SO-day sea journey from Boston,

Within a short time, events moved fast in the wake of the "first-five" going to work with seemingly boundless energy. With several parishes and schools coming up across far-flung areas of the province under the watch of Patna Jesuit Society, a divine calling witnessed during the decades leading to India's independence, over 150 American Jesuits move home from Midwest, US, to Patna, India to support the work.

With possessions limited to a few pairs of trousers and shirts, a couple of cassocks, and a shared baseball kit, the priests added to their meager worldly assets a treasure trove of love and admiration from countless grateful Indians.

When St Xavier's School Patna, opened in 1940, it set into play events that would impact countless lives. The school became a model for many other Catholic schools not only in the city but in places as far away as the Himalayan nation of Nepal and the distant Indian princely state of Jaipur.

The spectacular impact these Catholic institutions collectively had on the rapid development of post-independence India is impossible to quantify.

Jugal Kishore Gupta is a graduate in science and a post-graduate in computer applications.

He started his career as a banker in 1979 and switched to software development in 1995.

After 21 years in the software industry, he retired from Misys Software Solutions Pvt Ltd in 2016, where he was the Principal Architect in the company’s core banking group.

The memoir is the author’s first foray into formal writing, a passion he nurtured for long, and wishes to pursue in his senior years now.
For more detail, please visit my website: https://jugalgupta.com

Shades Of The Tamarind Tree (Paperback)

Be the first one to write a review for the book Shades Of The Tamarind Tree (Paperback).

Blue, Green and Everything in Between
Dr. Prasad Modak