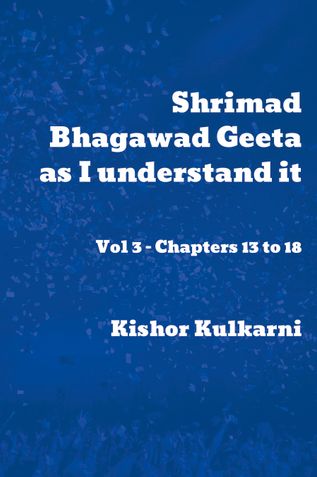 Shrimad Bhagawad Geeta as I understand it

Shrimad Bhagawad Geeta (also referred to simply as the Geeta) is the most revered of Indian scriptures that comprehensively presents the highest spiritual philosophy in the Indian tradition. It is believed to be told by Lord Shri Krishna to Arjuna on the Mahabharat battle field of Kurukshetra. Just before the epic war between Pandavas and Kauravas was to begin, Arjuna was suddenly overcome by confusion about whether it was right for him to fight and kill his own cousins and other relatives as also his revered teachers (gurus) and other elders who were standing opposite him as his enemies. As a result, he dropped his weapons and sat down in his chariot in a completely distraught mood. It was then that Shri Krishna who took upon himself the job of being Arjuna’s charioteer, preached the complete spiritual philosophy by way of Shrimad Bhagawad Geeta. It helped Arjuna understand clearly what this creation is and what the purpose of human life in it is. He could then proceed with fighting the Mahabharat war as a duty in a detached manner.

The power of the Bhagawad Geeta philosophy is tremendous. One who reads/listens to it in complete faith and with total devotion gets liberated from the bondage to the bodily identity. Arjuna had been completely overwhelmed by moha (attachment and wrong notions of “me/mine”) at the beginning and had refused to accept Shri Krishna’s initial arguments. But later, as Shri Krishna unfolded the profound spiritual philosophy, even that otherwise extremely debilitating moha of Arjuna completely vanished and he became ready to act in accordance with Shri Krishna’s preaching. This also drives home the potent influence of a true guru on his disciple. We can understand this as a change in the relationship between Arjuna and Shri Krishna as the Geeta progresses. Initially, Arjuna was still seeing Shri Krishna as a friend and a relative. Then gradually, he realized that Shri Krishna was Divine incarnated and hence accepted Him as his guru. Shri Krishna also then put in His all into His preaching and revealed all that is worth knowing in spirituality. In fact, Shri Krishna even granted His Vishwaroopa Darshan to show Arjuna that everything is just one, namely the Divine, and nothing exists apart from Him. No wonder Arjuna’s moha disappeared totally.

Shri Kulkarni was born and brought up in a fairly conservative brahmin family in a small town, living a typical god fearing life till his early youth. Later, he moved to the metropolitan city of Mumbai (India) to do his graduation in technology from Indian Institute of Technology, Bombay, a premier technology institute in India. Through his career, he lived in many different places interacting with many different people of widely varying thinking. As such, by virtue of his education and profession, he must have changed significantly from a god fearing child and teenager to a “rational intellectual adult”, such as they come in the modern times! So, he never thought he would ever become a serious spiritual seeker.

In the year 2000, he stayed with his younger brother in Singapore for about 3 months, when he was on a short project assignment and his brother was a permanent resident of Singapore. The brother had already got onto the spiritual path and had received “deeksha” (initiation into spiritual pursuit by a self-realised guru) from a living guru. During a conversation, Shri Kulkarni once said to his brother that being an intellectual, he didn’t think he would ever “surrender” to a guru to get into a serious spiritual pursuit! But The Divine willed otherwise! Within a few days of this conversation, Shri Kulkarni had an encounter with his brother’s guru and it transformed him into a different person. He took up spiritual pursuit in earnest interest and got formally initiated by his sadguru.

Shri Kulkarni believes that his encounter with his brother’s guru in Singapore as described above was the divine nudge to him to get on to the spiritual path.

Shri Kulkarni says he is just an ordinary seeker. However, he was blessed by the Almighty with a sustained desire to study Shrimad Bhagawad Geeta which is the best spiritual philosophy in the Indian tradition. He read and reread the commentary non pareil on it, called Shri Dnyaneshwari or Bhaavaarth Deepika by one of the greatest Indian saints, Sant Shri Dnyaneshwar Maharaj. Shri Kulkarni’s understanding of spirituality comes totally from his reading of Shri Dnyaneshwari and the related literature / discourses by his guru lineage.

More than 30 spiritual articles of Shri Kulkarni have been published by one of the leading daily newspapers of India, The Times of India, in its column on spirituality titled Speaking Tree. He has also self-published following other books –
1) Do Not Take This World Seriously! (Two volumes)
2) Spiritual Musings of An Ordinary Seeker
3) Shri Dnyaneshwari (English translation in 3 volumes)
4) Practical Insight into Shrimad Bhagawad Geeta
5) Bhagawad Geeta- Distilled Philosophy
6) Geetasaar (Essence of Geeta in Marathi)

All the books are available on Amazon in the form of eBooks (Kindle) as well as print copies.

Shrimad Bhagawad Geeta as I understand it

Be the first one to write a review for the book Shrimad Bhagawad Geeta as I understand it.