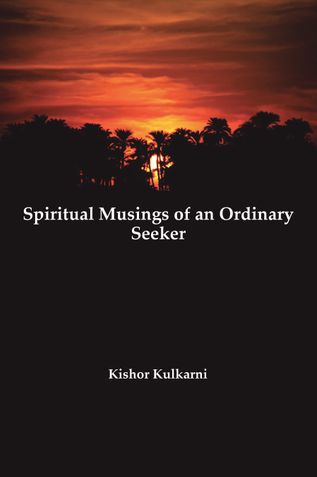 Spiritual Musings of an Ordinary Seeker

So long as one is living a typical worldly life, one regards oneself to be at the centre of everything! That centre may be as small as the individual alone or may be larger to include one's family, friends, community, country etc. But the centre is still very much rooted in the physical world.

One's spiritual pursuit can be said to begin when one starts wondering about what could be beyond the physical world - before and after one's life in it. It makes one realise the futility of continuing with the physical world of objects as the central focus of all our activities. Spirituality is basically an attitude to life which is not based on the physical world. It can get formed only after one reads the philosophical thoughts of renowned spiritual thinkers, contemplates on the real purpose and nature of creation and internalises it.

A spiritual attitude helps one live a worldly life in a more even-minded way without seeking anything in particular or without abhorring something else, taking life as it comes. Then one's worldly life may still appear not to have changed; but one's outlook towards life is entirely different.

This book presents various typical scenarios from our day-to-day life and how we can have a spiritual outlook towards them. It is a collection of the articles of the author published in the Speaking Tree column on the editorial page of the leading Indian newspaper, The Times of India.

The author was born and brought up in a fairly conservative brahmin family in a small town, living a typical god fearing life till his early youth. Later, he moved to the metropolitan city of Mumbai (India) to do his graduation in technology from Indian Institute of Technology, Bombay, a premier technology institute in India. Through his career, he lived in many different places interacting with many different people of widely varying thinking. As such, by virtue of his education and profession, he must have changed significantly from a god fearing child and teenager to a “rational intellectual adult”, such as they come in the modern times! So, he never thought he would ever become a serious spiritual seeker.

In the year 2000, he stayed with his younger brother in Singapore for about 3 months, when he was on a short project assignment and his brother was a permanent resident of Singapore. The brother had already got onto the spiritual path and had received “deeksha” (initiation into spiritual pursuit by a self-realised guru) from a living guru. During a conversation, the author once said to his brother that being an intellectual, he didn’t think he would ever “surrender” to a guru to get into a serious spiritual pursuit! But The Divine willed otherwise! Within a few days of this conversation, the author had an encounter with his brother’s guru and it transformed him into a different person. The author then took up spiritual pursuit in earnest interest and got formally initiated by his sadguru.

The author believes that his encounter with his brother’s guru in Singapore as described above was the divine nudge to him to get on to the spiritual path.

The author claims to be just an ordinary seeker. However, he was blessed by the Almighty with a sustained desire to study Shrimad Bhagawad Geeta which is the best spiritual philosophy in the Indian tradition. He read and reread the commentary non pareil on it, called Shri Jnaneshwari or Bhaavaarth Deepika by one of the greatest Indian saints, Sant Shri Jnaneshwar Maharaj. The author's understanding of spirituality comes totally from his reading of Shri Jnaneshwari and the related literature / discourses by his guru lineage.

The author had been regularly posting his spiritual musings as blogs on the Speaking Tree website of Times Group of India. Also, more than 20 spiritual articles of his have been published by one of the leading daily newspapers of India, The Times of India, in its column on spirituality titled Speaking Tree.

Spiritual Musings of an Ordinary Seeker

Be the first one to write a review for the book Spiritual Musings of an Ordinary Seeker.

Rama and the Early Avatars of Vishnu
Swami Achuthananda