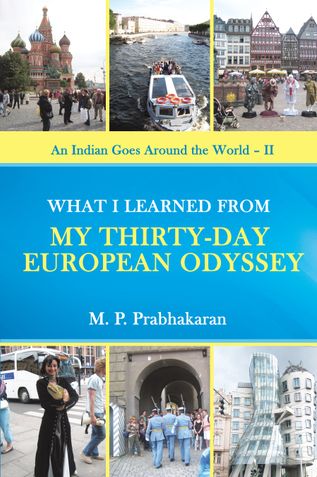 An Indian Goes Around the World - II: WHAT I LEARNED FROM MY THIRTY-DAY EUROPEAN ODYSSEY

This is the second book by M. P. Prabhakaran on his world-trotting experience. In the preface to the first book, "An Indian Goes Around the World – I: Capitalism Comes to Mao’s Mausoleum," he describes his passion for travel thus: “I travel, therefore I am – apologies to Descartes for twisting his noble thought.”

In the preface to this second book, devoted exclusively to the tour he undertook through ten countries of Europe in the summer of 2009, he goes a step further and sums up his experience through a mangled version of poet Percy Shelley’s immortal words: “The more we study, the more we discover our ignorance.” Prabhakaran’s mangled version: “The more I travel, the more I discover my ignorance.”

The 2009 tour, he says, opened his mind to various aspects of European cultures he had been quite ignorant of until then. It cleansed his mind, he adds, of the many misconceptions he had about peoples and events that shaped the destiny of Europe. It convinced him, once again, that bookish knowledge is no substitute for the knowledge one gains from the people he interacts with, events he witnesses, and things he gets exposed to during his travels to new places.

Prabhakaran shares that knowledge with readers through the pages of this book.

Most of his working life, M. P. Prabhakaran straddled two professions: journalism and teaching. He started his career in journalism, in 1969, as a cub reporter on Current, a weekly newspaper (now defunct) published from Bombay. He then moved on, as a sub-editor, to March of the Nation, another Bombay-based English weekly (which is also defunct now), and then to Free Press Journal, one of India’s leading English dailies.

After immigrating to the U.S. in 1975, he worked as the editor of The Voice of India, a monthly, and of South Asia Newsspecial, a news and feature syndicate. Both were published from New York.

Side by side with his journalistic work, he pursued a Ph.D. in Political Science, at The New School for Social Research, New York. After completing the Ph.D., in 1988, he taught for several years as an adjunct professor of political science, at the City University of New York.

Since 2001, Prabhakaran has been travelling extensively and posting his travel experience on The East-West Inquirer, an online monthly he started that year. The monthly, published at www.eastwestinquirer.com, also carries his social and political commentaries.

An Indian Goes Around the World - II: WHAT I LEARNED FROM MY THIRTY-DAY EUROPEAN ODYSSEY

Be the first one to write a review for the book An Indian Goes Around the World - II: WHAT I LEARNED FROM MY THIRTY-DAY EUROPEAN ODYSSEY.

Other Books in Politics & Society, Travel

We Miss You: The Edge of the Which ...
Aryan Dhiman

The Bleeding Pen
The PACT