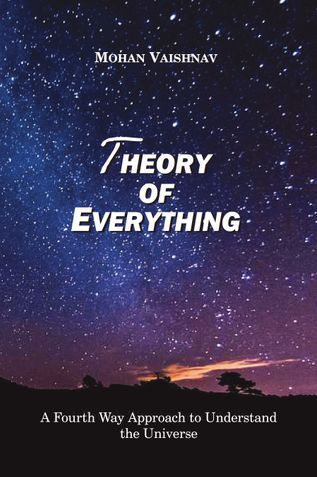 A Fourth Way Approach to Understand the Universe

The central idea of this book is to understand the Universe and man’s place in the entire scheme of Cosmoses, based on the synthesis of the eternal fundamental universal laws known to ancient wisdom and the findings of the Modern Sciences.

In last two centuries the development of Science has been topsy-turvy. A road map, a whole and complete picture in which the pieces of science can find its relative places is missing. The approach of Modern Science of studying various manifestations and deriving principle wherefrom and going bottom-up is misleading at times. We have witnessed this in the past, in the sense that certain scientific research and findings have been invalidated over a period.

In this book the top-down approach has been taken which is based on the fundamental eternal universal (everywhere-applicable) laws known to ancient spirituality. It synthesizes everything into one organic whole and unfolds a Model of the Universe based on combined view points of the findings of the Modern Science and Ancient Knowledge of these eternal laws. It also contains a research work on the Energy Binding Mechanism in the Theoretical Physics.

Modern Science still has much road to travel for understanding: (1) the phenomena of locking up of the energy in Energy Binding Mechanism; (2) different grades of time (i.e. time within time discussed in this book); (3) the quality of various orders of Space; (4) the process of formation of cellular matter to give birth to the Organic Life on earth, and (5) the Ray of Creation (Utpatisarga) for understanding the direction of approaching the research in connection with the life (Aliens) on other parts of the Universe.

Deep down everything is connected with one another, and the fundamental eternal universal laws are equally applicable to the science as well as to the spirituality. Now it is high time for modern scientists to seek the help from these laws known to ancient spirituality for science’s unanswered questions.

Mohan Vaishnav is an author and corporate law professional based at Ahmedabad, Gujarat, India. He is a commerce graduate and an associate member of the Institute of Company Secretaries of India, New Delhi. He is having his office as a Practicing Company Secretary in Ahmedabad since 1997. During the initial years, along with his practice in corporate laws, he developed a software package for computation of financial and tax related projected workings, which many Corporates and Chartered Accountants had bought that time.

Since early college days he developed an inclination to read autobiographies of remarkable people. After occurrence, in March, 1997, of a life changing experience, which has been narrated in his book “An Organic Whole of All & Everything”, he started taking the spiritual Work on himself seriously and earnestly.

In October, 2013 his first book, “All & Everything in Diagrams” was published by Narrow Gate Press, London MMXIII, 7, Riverside Drive, Richmond TW10 7QA, England. Then he wrote his second book “Sonnets of Shakespeare Explained” in July, 2014. So far he has authored following books:

(1) All & Everything in Diagrams
(2) Sonnets of Shakespeare Explained
(3) An Organic Whole of All & Everything
(4) Consciousness and Transforming Suffering
(5) Theory of Everything
(6) Human Types
(7) Awakening, Dying and Re-birth

By synthesizing the ancient Vedantic knowledge with the findings of the modern sciences, his book, ‘Theory of Everything’ presents a simple approach to understand the Universe and its workings, containing therein research work in Theoretical Physics, Mathematical aspects related with higher dimensions of Time and Space, various grades of Times (that is, time within time); and it also unfolds an idea how various sciences are placed in a connected way in the entire scheme of the whole.

Be the first one to write a review for the book Theory of Everything.