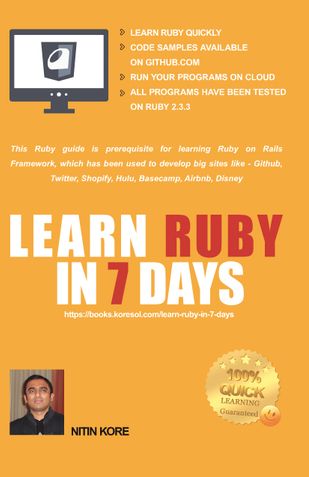 Ruby is a pure object-oriented and open source programming language that supports all kind of platforms including Windows, Mac OS and all versions of UNIX.

Who is the target audience?

=>Anyone who wants to start their career as a software programmer

=>Anyone who wants to start their startup in software space

What will you learn?

Nitin Kore is the Founder and CEO of KORESOL SOFTWARE LLP and has formerly worked with many MNC's like Infosys, TCS, Cognizant, Polaris, and CMC before starting his own company KORESOL. He has completed his Bachelor of Engineering (B.E.) from COEP - Pune University. He has about two decades of experience in the field of Information Technology. He also has a vast experience in serving many Fortune 500 clients like Citibank, Fidelity, S&P, BNY to name a few. Nitin always had a vivid passion to give back to the society, and this passion led him to come up with this quick guide for Ruby programmers that would help them understand the widely used concepts in Ruby. These concepts are also important for anyone who wants to learn Ruby on Rails framework.

Be the first one to write a review for the book LEARN RUBY IN 7 DAYS.