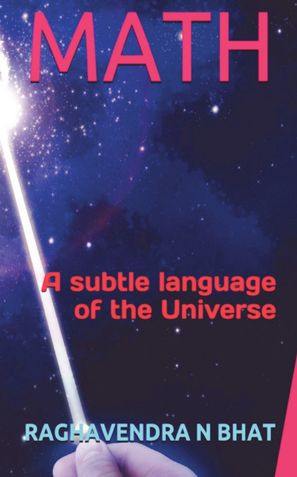 MATH - A Subtle Language of the Universe

Over the course of time, mathematics has been greatly misunderstood.Is it really that difficult? Is it really something that should be hated? Math - a Subtle Language of the Universe is a humble attempt of a teenage math enthusiast to change the thinking of people towards a wrongly interpreted art. From ancient Indian texts to modern day teaching policies, experience the beauty of math in a different way.

Born on 13th of March, 1999 to Sri Narasim Bhat and Smt. Shashikala Bhat, Raghavendra has been sharing his fun and passion for mathematics all over the world since the tender age of 13. He has performed well over 50 times in India as well as the US. Inside India he has performed at TedX Manipal, 2012; at NITK Engineer 2013, at IIT Chennai, at CMR Institute Bangalore, at International Algebra Conference at MIT, Manipal and also in various schools and colleges.

His shows at the National Conference on Numerical Methods and Modern Alegebra in 2013 been applauded by distinguished and senior mathematicians like Prof. E. Sampath Kumar, founder member of the Ramanujan Mathematical Society.
In April 2016 and September 2017, Raghavendra toured the US, giving his talks everywhere. He performed at prestigious places such as Harvey Mudd College, Wright State University, UIUC, and Miami University. He also performed at Intel.

His 90 minute show at PPC Udupi, was witnessed by Udupi's Admar Mutt swamiji, who blessed him a "true genius who has innate knowledge not taught by anyone".
When in Grade 7, Raghavendra was recognized as a gifted child both in Math and Science by Duke University's TIP (Talent Identification Program). GT Foundation, Mangalore honoured him in December 2013. He has secured 2nd rank in the state in the science aptitude test, when in grade 7 and secured 6th rank in the country, when in grade 9.
American Math Wiz and one of the top TED speakers, Dr. Arthur Benjamin, invited him to his house and Raghavendra spent a week with him in March 2016.
Raghavendra has studied tabla under Pandit Madhav Achar in India. He has also taken advanced tabla classes from Pt. Sadanand Naimpalli, Mumbai. He has bagged many prizes for his tabla performances.

Before mathematics, Raghavendra was passionate about the universe and made large scale models of the planets and stars, and, when he was in 5th grade, presented to science teachers of his region.

MATH - A Subtle Language of the Universe

Be the first one to write a review for the book MATH - A Subtle Language of the Universe.

Java program to insert big number which are ...
Shubhankar Paul