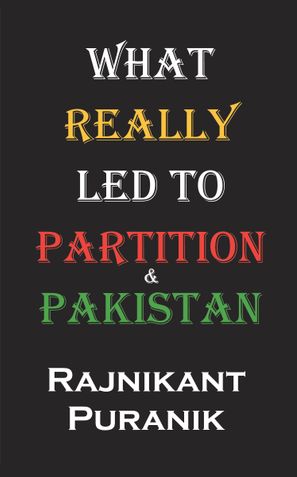 What Really Led to Partition & Pakistan

This book comprehensively covers all the aspects and angles, and the machinations that ultimately culminated in the partition of India, and creation of Pakistan.

The book begins (Chapter-1) by deliberating on the questions of country, state, nation, nationhood, and nationality; and discusses India, Pakistan, Hindus and Muslims in that context.

Chapter-3 brings out the REAL reasons and details all the different factors responsible for the creation of Pakistan, categorised under three main heads: (a)British Vested Interests; (b)Islam, Muslim-mindset and Muslim leadership; and (c)Clueless Congress Leadership.

Chapter-4 gives an overview of the main Muslim political parties; and the biographical details of prominent Muslim leaders.

Chapter-5 presents detailed ‘Timelines of Run-up to the Partition’ starting from 1881.

Chapter-6 ‘Timelines of the Partition Process’ brings out all the interesting happenings leading to the actual partition triggered by Attlee’s declaration of “Quit India” resolve on 20 February 1947.

Chapter-7 discusses the ‘Diabolical British–Muslim League Design’ to ensure a highly truncated India by hiving off all of Punjab, Bengal and Assam to Pakistan.

Chapter-8 deals with the arduous task of partition of assets between India and Pakistan ably handled under the guidance of Sardar Patel.

The last chapter (Chapter-9) deals with the horror of partition and the irresponsible way in which it was handled by all the parties responsible—the British, the Congress leadership, and the Muslim leadership—especially the British.

What Really Led to Partition & Pakistan

Be the first one to write a review for the book What Really Led to Partition & Pakistan.