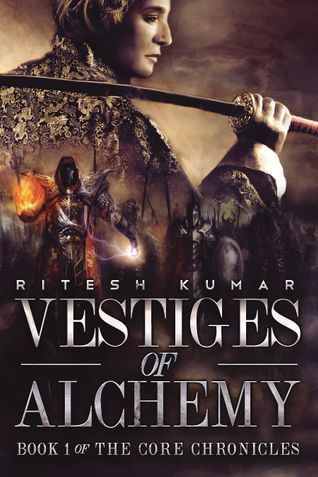 Book 1 Of The Core Chronicles

Centuries ago, the ancient war of the alchemists threatened the harmony of the land. Zorback, the reigning captain of the Alchemists of Death, desiring forbidden knowledge and immortality, waged war against humanity. Desperate to defend the spirit of the world, called the Core, the opposing faction of Alchemists sacrificed their lives and created a spiritual shield that split the world in two- one half decaying under the influence of elemental corruption while the other resurrecting itself from the war’s aftermath.

Present day, the tainted half threatens to engulf all that remains. One Alchemist, Balthier of Earth, is resurrected by the Core in order to restore balance to the world. The legendary warrior returns to an age suffering from economic, political and environmental crises. With the name of Alchemists wiped out by tides of time, he must find the prophesied last Alchemist and brings nations together before the shield crumbles and the corruption consumes what’s left of a breaking world.

Ritesh Kumar was born in Lucknow, Uttar Pradesh, India on the 10th April of 1983. He was educated at the reputed City Montessori School, where he spent much of his time studying Math and Physics, reading Shakespeare, and dreaming stories. His passion to write started at an early age where he wrote short stories and comics. He went on to Bharati Vidyapeeth College of Engineering Deemed University to attain a bachelor’s degree in Information Technology. The day dreaming never stopped, and the short stories soon changed to full length novels. None of the work, however, reached an audience and the dream to write slowly faded away under pursuit for livelihood.

In 2006, Ritesh joined Infosys technologies as a software engineer and drowned himself in the world of software development for investment banks for the next ten years. During this time, he travelled to Tokyo where in the four years of his stay, his love for writing fiction rekindled. He attended Writers workshops and forums in the city to learn the art of writing and started giving shape to the first of the many stories to publish.

Ritesh is currently working in an investment bank as an associate but he is equally focused in bringing his first book, Vestiges Of Alchemy, of his upcoming fantasy trilogy, The Core chronicles, to readers around the globe.

Be the first one to write a review for the book Vestiges Of Alchemy.