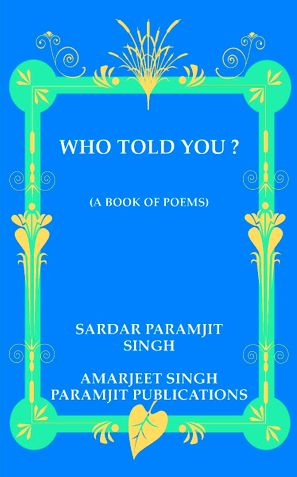 SOME VIEWS OF THE READERS
“Your poems are very good and show that you have lots of talent. You have a most unusual approach and there is no doubt that given the right treatment, there should be a certain demand for the book.”
Excalibur Press of London (England)
“Poetically seen your poems have a musical quality, and would be good as texts for songs.”
“Weeping Stones”
“The poem is full of good and compassionate feelings for those who suffer silently.”
“Who Told You?”
“The thought expressed is very intelligent and given the historical fact of the Nazi Government the general meaning it has.”
“When I Die”
“To my mind there is something missing in that poem: why should one not be sad at the death of a person???.........It sounds an elegy in modern language.”
Mrs. Barbara Schneider
Literatur Labor Hamburg (Germany)
“I enjoyed reading your poems.”
Caroline Mardall
Oxford University Press (England)
“I really did appreciate reading your lyrics, sad, very melancholic but freshening.”
Mrs. Audrey Motaung
Famous Singer in Germany.

Sardar Paramjit Singh was born on 01.02.1963 at the village JANDIALI Post Office JAMSHER KHAS in Tehsil and District JALANDHAR, PUNJAB, INDIA. He belongs to Jat Sikh family and his Genealogy is NAHAL. His father S. Gurdev Singh is a farmer and his mother Parkash Kaur was a house-wife.On 4th JULY 1977 he was deeply shocked at the untimely death of his mother who was cremated the next day on 5th of JULY 1977 and that period remained unforgettable throughout his life. That event made his mind miserable and depressed. He began to write poems. He wrote some novels at very young age.
He got married on 21 Nov 1992 with Kuldip Kaur daughter of Late Sardar Chain Singh and Late Sardarni Harbans Kaur residents of village CHITTI, Distt. JALANDHAR. On 17 Feb 1994 daughter Amandeep Kaur was born and on 11 JAN 1998 his son PARAMVIR SINGH was born.
In 1993 he established AMARJEET SINGH PARAMJIT PUBLICATIONS.In 1990’s he wrote many articles which were published from time to time in newspapers i.e. Daily Ajit, Akali Patrika, Aj Di Awaaz. He wrote many poems in German which were published from time to time in Kultuergespraech (The Cultural Dialogue) a magazine published by Mahatma Gandhi Memorial College, Udupi, Karnataka.
A highly qualified Sardar Paramjit Singh holds degrees of M.A. (English), M.A. (Punjabi), M.A. (History), B.ED., ZDAF and many more certificates. He has knowledge about English, German, French, Spanish, Arabic, Hindi and Punjabi Languages. A young and pious Scholar and Academician of rare talents, he has written five novels in Punjabi i.e. Azaadi ,Maut Nun Talash Rahi Zindgi ,Bewafa,Zaalam Umidan, Laadli Dhee, penned two books of poems in English i.e. Who Told You? & He Told Me and a book of poems in Germa i.e. Ich Will Werden. He has written many articles in different Languages. Besides these, he has exhibited his religious bent with annotations of many holy verses of Sikhism. Several educational books were translated by him from Hindi and Punjabi to English. Sardar Paramjit Singh had already come a long way at quite young age and he has so many milestones ahead of him. We wish him to achieve many more laurels.

Be the first one to write a review for the book WHO TOLD YOU ?.