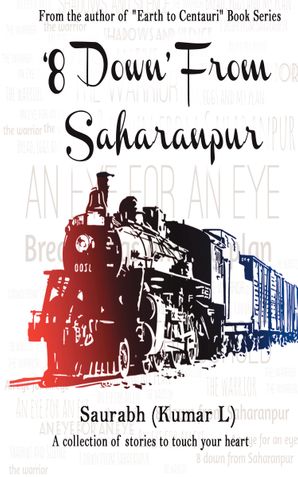 8 Down From Saharanpur & Other Stories

A collection of stories to touch your heart

Nine striking stories with delicious twists and unexpected turns: some dark, a few humorous and two which are terrifying.

A woman discovers that her father had been murdered and sets out to get her revenge. Is revenge a dish best served cold?

The promise of a regular working day is turned upside down: envy, desire, anger & hope struggle for dominance in his heart.

1925, British India – a young boy witnesses a train robbery, and the birth of a revolution.

A soulless psychopath follows a mystical book, leaving bodies in her wake. What is the price Kish will pay to stop her?

A subtle retelling of a mythological tale. He will finally meet his savior joining the war against evil thus fulfilling His destiny.

The story of a family caught in the middle of a zombie invasion. Will the living dead claim their own?

A con artist, a spurned wife, a few crooks – the perfect setting for a double cross.

Whether you want to discuss faster-than-light travel, time travel, black holes or just the latest mobile phone, Kumar is your person.

He is a tech and social media enthusiast. He enjoys travelling and is fluent in several languages. A mechanical engineer who loves pulling apart gadgets and exploring their innards, he writes science fiction stories and tries to bring future technology alive in his books.

The First Journey is the first book of the Earth to Centauri series. It is easy to read and understand and is suitable for all age groups. The First Journey and Alien Hunt, the second book in the series, are both based on themes of adventure, thrill and drama, with a positive outlook at what the future may hold for humanity. Black Hole: Oblivion is the third book in the series with the latest adventure of Captain Anara and her crew.

His books have also been translated and published in Hindi.
You can reach him on
Twitter @Captain_Anara,
Instagram @KumarLAuthor,
www.facebook.com/kumarlauthor

8 Down From Saharanpur & Other Stories

Be the first one to write a review for the book 8 Down From Saharanpur & Other Stories.