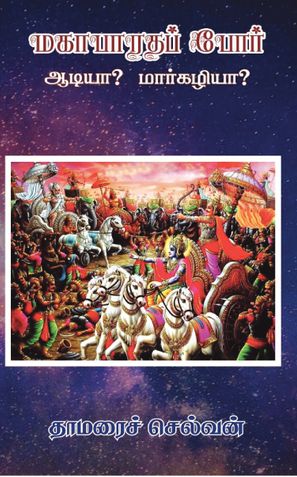 Tamilnadu is very special in terms of Mahabharata. Here The people believe the Mahabharata war happened in Ashada (Aadi) month of Hindu calendar. There are several festivals relating to Mahabharata during that month. But the scholars of north India say the war happened in Margasirsa (Margazi) month,

This book analyses original Sanskrit slogan and Astrological and Astronomical facts. There are 23 items explored in detail and it is evident in the end actually the Mahabharata War happened in Ashada (Aadi) month of BC 3172. There is corruption happened due to lack of understanding the events occurred during the wartime and the Pundits can't explain few factors. So they tried to move the war to Margasirsa (Margazi) month.

The half cooked attempt is exposed by analyzing the 23 events in Chronological order with logic. For Example As per experts war started after seven days of Krishna's peace mission. But as per Vyasa Bharata, Balaram who starts his yatra after Krishna's Peace mission, comes back on the 18th day of war. He says he has been away for 42 days, started his journey under Pushya nakshatra and came back on Shravana Nakshatra. The start count for no. of days also 42.

The back bone of Margasirsa (Margazi) month war has been broken by showing more than 20 evidences in this book. And the Planet position calculation Exactly matches according to Panchanga we currently using. It matches the Kaliyug Beginning also.

The analysis here is mathematical, Analytical, Logical, Scientific and uses Astronomy and Astrology.

Thamarai Selvan, well known as “Sor Silambar” (Martial Artist of words) is a senior member and advisor of www.tamilmantram.com , an internet Tamil discussion forum. He is well known for his writings in Hindu philosophy, astronomy, astrology, sports, jokes and varieties of poems. He is the believer of “Alternate thinking” and “Multi-dimensional visualization”.

He is currently writing simplified meanings of Thirumandiram verses on a daily basis under the tittle Dhinam our Thirumandhiram. His essays and debates on Ramayana and Mahabharata are priceless and have been praised by Mahabarathan translators.

Be the first one to write a review for the book Mahabharat War.