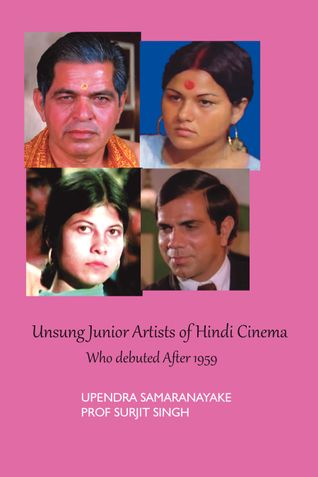 Unsung Junior Artists of Hindi Cinema Who Debuted After 1959

This is the second book on Junior Artists (previously called Extras) in Hindi cinema. In the first ever book we wrote about Junior Artists who debuted before 1961. These people are NOT lead players, supporting or character artists. These artists are supposed to remain inconspicuous, do not have a spoken part, never get a closeup, and, are akin to other props on the set such as sofas, stuffed tigers and wall clocks!
A lot of these artists are seen as teachers, temple priests, policemen, moneylenders, henchmen, beggars, lawyers, judges, and regular party goers or court attendees, to name a few. They are known by various names: junior artists, atmosphere, background talent, background artists or performers, supernumeraries, supers, walking background, human props, and so on. Of course, they are never mentioned anywhere.
In this book you will find 63 of them (who debuted after 1959) named and identified by their roles in hundreds of films. We have also included Darshan and Moolchand, who debuted before 1961 but were inadvertently left out Vol 1. Next time when you watch your favorite film and wonder who is that sitting at a party or in a cabaret, open this book and you will be find enlightenment!

Upendra Samaranayake is a die hard movie fanatic and a fan of
the unsung and little known artists. He has seen 3,556 films of
which 1,192 films were Hindi. He was born in Sri Lanka and
moved to the United States at the age of 10. He learned Hindi from
watching films.

Professor Surjit Singh, a diehard movie fanatic, period. He is a retired
Theoretical Physicist. He has been watching Hindi movies since 1952,
has been collecting Hindi songs, movies and magazines since 1969, and
has been writing about these things since 1996. He has had a website
since 1999,
http://hindi-movies-songs.com/joomla/

Unsung Junior Artists of Hindi Cinema Who Debuted After 1959

Be the first one to write a review for the book Unsung Junior Artists of Hindi Cinema Who Debuted After 1959.

Other Books in Entertainment, Performing Arts