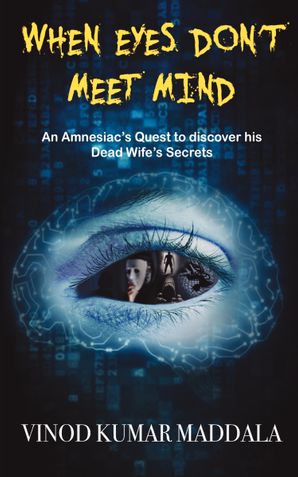 An Amnesiac's Quest to discover his Dead Wife's Secrets

In a major car crash, Nicholas Thomas’ wife, Sophie was killed. He, himself, was left crippled, confined to a wheelchair, with his memory erased. Once a smart detective, he is now helpless but still an eccentric persona.

When browsing through his dead wife's private room, he stumbles upon an intriguing painting which makes him realize that Sophie had been having a secret affair with an unknown person.

Challenged by the mystery, he swears to rebuild his memories with the help of a loyal friend.

He privately begins his hunt for her secret lover with the help of another eccentric detective from the dark web, who hides his identity citing professional reasons. During his journey, he flirts with his cute assistant and Demon's hot girlfriend.

As he digs deeper into the mystery, it seems that the mysterious adversary is doing everything to stall and block his findings.

The more he goes into the mystery, the farther the adversary seems to be.

After going through a series of puzzling events and revelations about his shocking and painful past— his intriguing mind holds his confidence in nailing down his enemy, his enemy' secrets and get justice for what was done to him and his family.

The story of love, pain, deceit, remorse, and revenge.

Please scroll up and grab your copy now or continue reading below.

Born and brought up in Hyderabad, Vinod Kumar Maddala has done Master of Science (M. Sc). He is a full-time software professional; a ping pong player representing at corporate level and has several wins in various tournaments to his name.

He is productively using his permitted time in pursuing his passion of being an ambitious author. He has several books lined up and he plans release them in the coming months.

Before embarking on his writing career, he polished his writing skills by investing his free time in developing short stories, blogs, and movie reviews. He makes appealing short movies in action and thriller genres and amusing dance videos with his kids.

A happy-go-lucky person and a philanthropist by nature, he feels blessed for being gifted with writing skills.

Be the first one to write a review for the book When Eyes Don't Meet Mind.