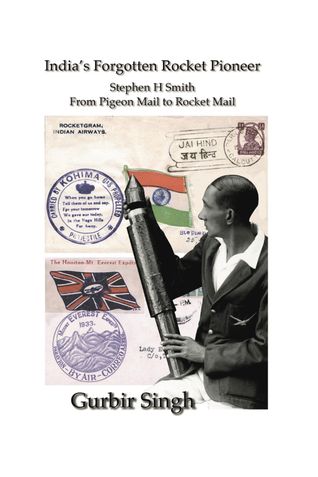 During 1934 and 1944 in Calcutta, Stephen Smith worked alone and unsupported on developing rocket transport. In 1935, he was the first to demonstrate the successful transport by a rocket of livestock, food and medicine. This book charts the story of Stephen H Smith, described by a contemporary as “the greatest one-man campaign for rocketry”. He dedicated his life working alone in northeast India to develop a new revolutionary means of transport using only rocket power.

The development of rockets in India is commonly understood to have ended with Tipu Sultan in 1799 and started again in 1963 with what is now called the Indian Space Research Organisation. However, in the intervening period, rockets were built, and championed by one man, working alone in Calcutta. In 1925 he set up the Indian Air Mail Society and it is amongst the global philatelic community where his work is still known but is almost entirely forgotten from the popular imagination in India.

On 14 February 1891, Stephen H Smith, the only son of a tea plantation manager originally from Norfolk, England was born in the Strawberry Hill region of Shillong. Between 1934 and 1944, he conducted over 200 rocket experiments to demonstrate the utility of a rocket as a means of transport.

Small self-funded groups to develop rockets were established in USSR, USA, Britain, Australia and Germany. It was from these groups that Sergei Korolev and Wernher von Braun emerged and competed in the epic space race that resulted in Sputnik, Gagarin and Apollo 11. Stephen H Smith was their contemporary but worked alone and unsupported in India.

Long after he had died, he was inducted into the Hall of Fame by the American Airmail Society in 1989. In 1992, a year after the centenary of his birth, the Indian government celebrated his achievements by issuing a stamp and a first-day cover dedicated to his work. Today his work is found in official NASA publications, the Journal of the British Interplanetary Society and in the National Air and Space Museum.

This new study of his contacts with the King of Sikkim, with King George V, with a member of parliament in London and a 25 year-long correspondence with a Swiss philatelist reveal in his own words his struggle to attain recognition and support for his work. His reluctant attempt to work with the military authorities in India during World War II ended in frustration. His multiple attempts in 1949 to contact the Governor of Bengal and Prime Minister Nehru in the newly independent India failed to generate a response.

Gurbir Singh is a UK based space writer. He studied science and computing and holds a science and an arts degree. Once keen on aviation, he has a private pilots licence for the UK, USA and Australia. He was one of 13,000 unsuccessful applicants responding to the 1989 advert in the UK “Astronaut wanted. No experience necessary” to become the first British astronaut, for which Helen Sharman was eventually selected and flew on the Soviet space station MIR in 1991

He is also the publisher of www.astrotalkuk.org, a not-for-profit astronomy podcast established in 2008. In 2011, Gurbir published his first book, Yuri Gagarin in London and Manchester. The book traces the visit of the world’s first spaceman’s visit to England with first-hand accounts from the people who saw and met him. His second book, The Indian Space Programme published in October 2017, is an account of the origin of India’s space programme, its current capabilities, and achievements and future ambitions.

Professionally his background is in Information Assurance and Cybersecurity. He is married and lives with his wife and daughter in Lancashire in England.

Be the first one to write a review for the book India's Forgotten Rocket Pioneer.

This is not a story
K sai shiva

A brief biography and writings of Bhagat Singh
Arun Jain