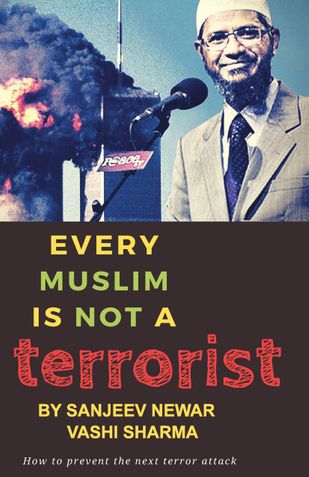 Every Muslim is NOT a terrorist

For first time, complete refutation of every point a Jihadi thinks to justify his hate against non-believers. The only book of its kind to solve the problem of brainwashing and self-radicalization.

Zakir Naik's rise has been significantly correlated with rise of terror-attacks across the globe. The terrorists involved in Dhaka siege, the ISIS Hyderabad Module Chief, Areeb Majeed who fled from India to join ISIS - all had one trait in common. Zakir Naik was their mentor.

Anyone from Indian subcontinent who has been active on terror-related issue would have definitely come across hundreds of fanatic young Muslims who believe that Allah will grant them 72 virgins in Heaven if they convert non-Muslims and hate idol-worshipping Hindus.

The vulnerable Muslim youth from Indian sub-continent, who does not know Arabic, relies on his interpretation of Quran and Hadiths as authentic Islam. Now his spread has reached weak minds in other countries as well.

They quote verbatim from lectures and writings of Zakir Naik that are sure-shot recipe for breeding terrorists. These fanatics would turn violent if you counter-question. The situation is indeed terrifying. Unless we do something, vast number of terrorists are already breeding worldwide who would conduct another Florida attack or Dhaka killing - lone-wolf or planned - as a religious duty.

The fanatic belief-set comprises following
- Only Muslims will go to Heaven. All non-Muslims will burn forever in Hell. Even if she is Mother Teresa or Gandhi.
- Among Muslims, only those who have converted non-Muslims will go to Heaven
- Jihad against non-Muslims is gateway to Heaven
- Osama Bin Laden was not a terrorist. America is a terrorist
- Sharia Law must be implemented worldwide.
- As per Sharia Law, those who leave Islam must be killed
- In Muslim rule, non-muslims must not be allowed to preach. But Muslims must preach in non-Muslim countries
- Those who worship graves - like Sufis - are worst of creatures
- Hindus deserve to be called Kafirs - the worst of creatures

Agniveer raised alarm against Zakir Naik 8 years ago and has been working relentlessly against radical Islam. Several youth who came back from clutches of Zakir Naik have narrated shocking details of his brainwashing cartel.

To fight this rise of terror, Agniveer created detailed rebuttals to Zakir's speeches and articles that saved vast number of youths from adopting the path of hatred. It exposed the workings of Islamic Research Foundation formed by Zakir Naik that funded and promoted people who instigated genocide and war against India.

Many of these exposes had to be withdrawn because government underestimated the threat Zakir posed to world peace and instead Agniveer had to face security threats.

In this book, we bring together all those writings that establish the threat that Zakir Naik poses. And soundly thrashes his every radical argument.

Not just Zakir Naik, the book soundly answers every radical argument of every fanatic who instigates people to adopt hate as religion.

This book can save the world if translated in major languages and circulated among vulnerable youth. And will equip non-Muslims to not fall trap to his promise of false Heaven by hating non-Muslims. It has already saved thousands and prevented many terror attacks.

The only way to counter self-redicalization is to destroy the source - those fanatics who breed hatred against non-Muslims in name of Islam that means Peace.

Funds from the book will be used to fight terrorism and prevent the next attacks.

Sanjeev Newar: Sanjeev Newar is the founder of Agniveer. He is the brain behind all major Agniveer's initiatives. He was the first person in world to predict the role of Zakir Naik in future terror acts back in 2010 which is now being accepted by intelligence agencies worldwide. Has miraculously accurate foreseeing capabilities vis a vis terrorism. The only genius, who understands Islamic terrorism in India inside out and the way forward. A data scientist by profession. His risk management products have been named in top 20 of world for 2014, 2015, and 2016. He is the only Indian (and Asian) to have ever made to this list. He has been behind several inclusive and encompassing tech innovations for agriculture, defense, food security, energy security. He is a mentor to several eminent young scientists of country. He is the most popular writer on Kashmiri Pandits on Quora. Sanjeev is an alumnus of IIT Guwahati and IIM Calcutta.

Vashi Sharma: Vashi Sharma is the Head- Operations at Agniveer. He is the force behind Agniveer's crusade against terror. He is second to none when it comes to understanding Jihad, fanaticism, Islam, Islamism and geopolitics. Nightmare for hit and run Jihadi cyber-terrorists as well as fanatics on ground. Has risked his life for bringing the youths back to mainstream by debating Mullahs even in wahabi mosques. He has unbelievable record in de-radicalization of youths, specially those misguided by fanatic clerics like Zakir Naik. Has freed thousands of people from the Jihadi clutches and brought them back to humanity. He is a respected energy scientist with numerous international Journal publications. He is a doctorate from IIT Bombay and a scientist with Ministry of New & Renewable Energy.

Every Muslim is NOT a terrorist

Be the first one to write a review for the book Every Muslim is NOT a terrorist.