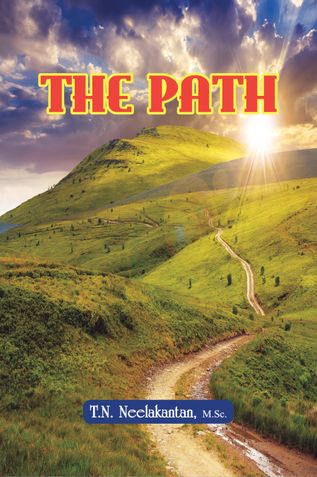 About the book: The Path
This book is about three naïve, village dudes – Sami, Rajan, and Koti who came together through some bizarre incident and became bosom friends. They were all in their teens. When they were idling away their time one day they happened to watch someone accidentally dropping a wallet while trying to board a bus in hurry. The wallet contained a lot of cash, they didn’t know how much. They were stunned. They hadn’t seen any money in their life.

Sami was engaged in collecting flowers from the gardens for his master flower vendor. Besides, he assisted the temple othuvar in singing Thevaram and Thiruvasagam, the sacred hymns in praise of Lord Siva. He was soft and gentle.

The physically strong Rasan collected wood from the nearby forests for supplying to the wood merchants.

Koti, the day-dreamer, was a shepherd, looking after the cows and animals for his master.

Their daily needs were taken care by what they were engaged in, but money, no, they hadn’t seen, and they didn’t need too.

As they were examining the contents of the wallet, a strong arm suddenly appeared to hold them tightly in order to prevent them from escaping with the money.

The person was none other than Kamala teacher, an acclaimed teacher, very popular among the school children and parents. A karate specialist too.

Soon, Kamala teacher realized that the three dudes were quite innocent and hadn’t intended to pocket the money that didn’t belong to them. With her help, the money was returned to the proper owner, who gifted them some money.

It was a full thousand rupees. That was so much for Sami, Rasan, and Koti. They didn’t know what they should do with the money.

There began their journey. They found some path that changed their life.

What path they discovered, how they themselves broke away from their path, and how they rediscovered it is the story. And Kamala teacher was always there for them.

T.N.Neelakantan, a post graduate in Chemistry is a retired professional and had an illustrious career in banking, finance, investments, insurance and human resources development in both India and Dubai. With his more than three decades of work experience, he is now settled in Tenkasi, a semi-urban town in Tirunelveli District of Tamilnadu. He is into training and development. He divides his time between India and USA.

L.N.Charitable Trust is promoted and managed by T.N.Neelakantan and his family. The trust focuses its attention on Youth Development.
He conducts programs on Personality Development, Motivation, and Communication Skills and also trains people in Spoken English.

Be the first one to write a review for the book The Path.